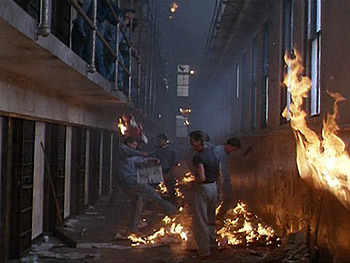 "Ready to fight to get what we need
Die on your feet or live on your knees."
— Yngwie Malmsteen, "Riot in the Dungeons"
Advertisement:

A prison is a place for violent people, and usually with violent practices, so in fiction, riots are natural. If The Hero is placed amongst the populace, expect him/her to be the one to instigate it. It could also be a public assault of a Pariah Prisoner; an inmate despised by the others. Convicts and guards are usually Color-Coded for Your Convenience. Expect mattresses and toiletpaper (fire optional) to be thrown around in a modern setting. Truth in Television.

Riots are usually a cover-up for a Great Escape. Related to The Mutiny.