Film / Down by Law 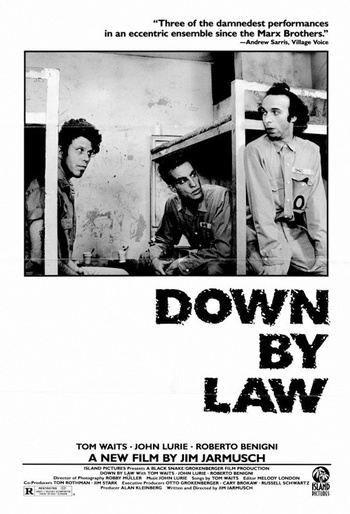 "It is a sad and beautiful world."
— Roberto, AKA Bob
Advertisement:

Down by Law is a 1986 independent film written and directed by Jim Jarmusch. It stars John Lurie, pre-Oscar Roberto Benigni and musician Tom Waits.

Jack (Lurie), a pimp, and Zack (Waits), a disc jockey, are both imprisoned in Louisiana for crimes they didn't commit. Before long they're joined by Italian immigrant Roberto (Benigni), who's in for manslaughter which he did commit.

Roberto soon comes up with a plan that allows them to escape prison together; they then must navigate the swamps and forests of Louisiana without being recaptured.