Punk in the Trunk 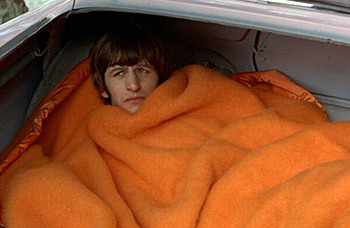 It ain't that great in here guys!
"Don't be dyin' in my trunk!"
— Robert Freeman, The Boondocks
Advertisement:

The trunks of cars are mainly used for stashing items that take up too much space in the cab of the vehicle. In fiction, generally, the trunks will be used for storing people, alive or dead. This can be for several reasons:

The last one overlaps with Dead Man's Chest, and may be part of a scheme for Disposing of a Body.

Note that it's only a "trunk" in countries which use American English. The rest of the English speaking world calls it a "boot" (probably because it's at the extreme "lower end" of the car).

The Boss stuffs her in the trunk of her car, then tricks Maero into running over it.

The Boss stuffs her in the trunk of her car, then tricks Maero into running over it.