Film / From Dusk Till Dawn 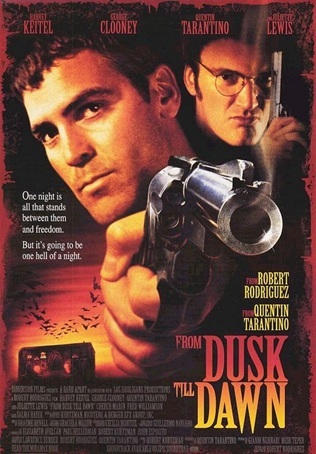 "Why, out of all the God-forsaken shitholes in Mexico, do we have to meet here?"
Kate: Are you okay?
Seth: Peachy, Kate. The world's my oyster, except for the fact that I just rammed a wooden stake in my brother's heart because he turned into a vampire, even though I don't believe in vampires. Aside from that unfortunate business, everything's hunky-dory.
Advertisement:

From Dusk Till Dawn is a 1996 film. It was directed by Robert Rodriguez, written by Quentin Tarantino and starring himself, George Clooney, Harvey Keitel, and Juliette Lewis.

The plot centers around the Gecko brothers, two dyed-in-the-wool criminals on the run from the police after a prison break in Texas. Causing death and destruction wherever they go, they eventually manage to sneak past the border with Mexico by taking a pastor and his two teenage children hostage in their RV. They go to a trucker bar, the Titty Twister, to spend the night as they wait for their rendezvous. What happens at this point is a very sudden and unexpected Genre Shift when it turns out that the bar is a front for a clan of vampires, and they have to fight for their survival through the night (hence the title). Of course, this has become widely spoiled and as such, loses most of its effect (in fact, many people probably rented the film and wondered where the hell the vampires were for the first half).

The movie got two Direct to Video sequels, though they share none of the creative cast and don't follow any of the characters introduced in the first film (except in the second sequel, which is about Santanico Pandemonium's origins), with the only connecting thread being the vampire bar/lair, The Titty Twister:

There's also the documentary Full Tilt Boogie, which details the making of the first movie in addition to showing the cast and crew just messing around.

There was also a PC video game.

In 2014, a TV series was made as one of the headliners of Robert Rodriguez's new network, El Rey.

From Dusk Till Dawn provides examples of: