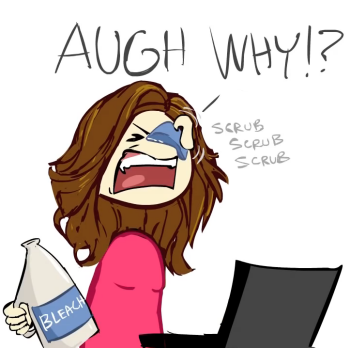 The poor dear. She was just doing

perfectly innocent research on old H-Games.
"I've many a time tried to the impossible task of washing away the memory of a sight that should never been seen. And let me tell you this: Febreeze in the eyes only brings more pain."
— Red Mage, 8-Bit Theater
Advertisement:

A character has just witnessed something so icky, so unsettling, so horrific, so weird, that they must express their strong disapproval. This Is Wrong on So Many Levels! that a simple "That's gross" won't suffice — only Brain Bleach can make things right.

The character informs the world that the continued knowledge of this subject is an unbearable affront to their sanity. They will not be at peace until they can remove their brain from their skull, scrub the offending mental image out with steel wool and mental floss, then disinfect the entire area with bleach (disinfecting their eyes or ears with fire is optional).

Will probably be necessary after seeing No Yay, Glurge, Fetish Retardant, a Gainax Ending, a Shock Site, Rule 34, Squick, or Fan Disservice (among many other things), or hearing Too Much Information. Often the result of Schmuck Bait, so always remember that You Do NOT Want to Know can be a helpful warning.

A Super-Trope to Screaming at Squick. Sometimes goes hand-in-hand with Nausea Fuel and Lost My Appetite. (Or going to lose it, if the victim has already eaten.)

Compare with Out, Damned Spot! (characters try to scrub away their guilt), I Need a Freaking Drink (when characters want to get too blitzed to remember what they've seen), Kill It with Fire, These Are Things Man Was Not Meant to Know, Too Much Information, Schmuck Bait, or even its auditory cousin (Ear Worm).

For a literal application of this trope, see Laser-Guided Amnesia (although that trope usually isn't applied as a remedy for Squick). Despite the similar name, not to be confused with Brainwashed and related tropes.

While talking about the timeline of Lily's Garden, he talks about how Lily's fiance has been cheating on her for her own mother... He then proceeds to erase his own pupils with eye bleach.

While talking about the timeline of Lily's Garden, he talks about how Lily's fiance has been cheating on her for her own mother... He then proceeds to erase his own pupils with eye bleach.