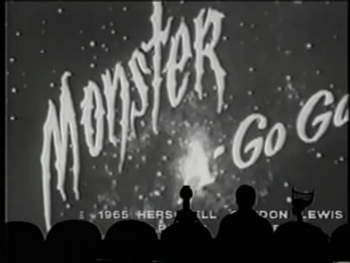 Monster a-Go Go? I thought this was going to be Munster Go Home!
"I recall this episode as being the first time we decided explicitly to write sketches having nothing to do with the movie. Really, we had no choice. (...A)ny topic that is about something (that is, any topic that exhibits "topicness") cannot, by definition, have anything to do with this movie."
—Paul Chaplin, The Mystery Science Theater 3000 Amazing Colossal Episode Guide
Advertisement:

Best Brains regards Monster a Go-Go as one of the worst movies they ever riffed on. It even gets an aside reference in their treatment of Manos: The Hands of Fate, implying that as bad as that movie was, this one might still be even worse.

Circus on Ice is a short about the 40th Annual Carnival of the Toronto Skating Club.

(The monster looks around outdoors)