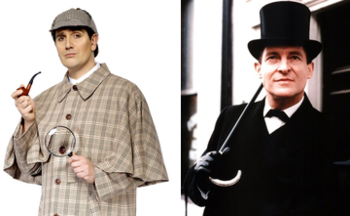 Left: what most people think Sherlock Holmes looks like. Right: how Arthur Conan Doyle actually depicted him (as seen in the Jeremy Brett series).
Rhodes: This is known!
Banner: I don't know why everyone believes that, but that isn't true.
— Avengers: Endgame
Advertisement:

There are some things that everyone knows. Well, sorta. As it turns out, people as a whole know less than they think they do. Casual viewers or readers of a work will often come away with their fair share of mistakes that, over time and through word of mouth, evolve into widespread misconceptions. Such fallacies are often used by actual fans as a yardstick of the difference between themselves and the masses, although fans themselves are not immune to holding these misconceptions (particularly by confusing Fanon and Canon).

All the same, these notions can be so firmly entrenched in the public zeitgeist that they can force their way into adaptations, much to the annoyance of the aforementioned fans.

May result from or lead to Lost in Imitation, or from any of the subtropes under Time Marches On. May result from Audience-Coloring Adaptation, where people assume the original work is the same as a well-known adaptation of the work. Often a result of Mainstream Obscurity, when a work existence is known by the general public, but very few people actually know what it's about. When left unchecked, it can lead to Analogy Backfire, Public Medium Ignorance, and Never Live It Down. Compare and contrast fanon and Pop Culture Urban Legends. See also Reality Is Unrealistic, The Coconut Effect, Dead Unicorn Trope, Everybody Knows That, Misblamed, and Shallow Parody. No relation to Lost Common Knowledge or the GSN Game Show of the same name.