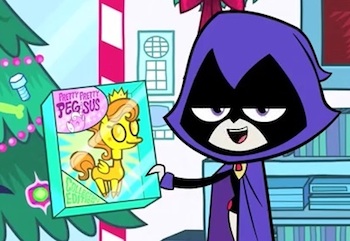 At least Raven sounds like a magical pony...
Advertisement:

From the height of The '80s fad days to The New '10s, My Little Pony has been etched in popular culture as a saccharine toy line for young girls who love horses.

Parodies and homages typically are shows within a show featuring Always Female pastel ponies (or other pastel animals) who can talk and have cutesy names. Flank/Rear Insignias are common but not a requirement. Occasionally, elements from other cutesy franchises like Strawberry Shortcake, Care Bears, or Rainbow Brite will get mixed in.

With the popularity of Friendship Is Magic with older audiences — partly because the series appeals to both children and adults — parodies have begun taking after it and are often more positive than previous depictions (or just poking fun at the fact that there even is an older audience in the first place, sometimes to Subculture of the Week levels).

Subtrope of Bland-Name Product. Not to be confused with cheap knockoffs of the show or toys, or with iPhony... Well, ok, maybe just this once.

The "Bob's Burgers" version of "My Little Pony" is "The Equestranaut".

The "Bob's Burgers" version of "My Little Pony" is "The Equestranaut".