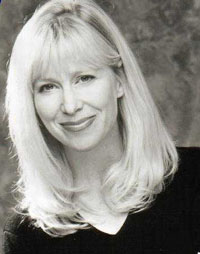 Katherine Ellen "Kath" Soucie is a very prolific Los Angeles-based voice actor, with over 30 years in the business (and counting!). She began her career in New York as a theatre actor, followed by featured roles in episodic television and movies of the week, out of Los Angeles.

Endowed with a natural talent for voices and characterizations, she became one of the top voiceover actors in The '90s, one of the highest paid in the industry, and is still working today. Her professionalism and versatility have created a steady demand for her talents.

Following the enormous success of Paramount's animated feature film The Rugrats Movie, she then started recording her roles of Phil, Lil and Betty in the theatrical sequel, Rugrats in Paris.

Among her other roles: Mike Young Productions' Clifford the Big Red Dog, Kino Films' Mike, Lu & Og, Stardust Entertainment's Stevie Stardust, Ubisoft's Rayman and Insomniac Games' Ratchet & Clank: Going Commando. Her trip into the digital world, however, started waaaay back in the Silver Age of video games with such titles as Full Throttle. This makes her longer lived than most studios or publishers of the time.

Her vocals can also be heard on such Emmy Award-winning classics as Captain Planet and the Planeteers, Tiny Toon Adventures and The Critic.

She is credited with many award-winning commercials and can be heard on campaigns for Greyhound, AirTouch Cellular, Eckerd Drugs, PetCo and Southwestern Bell.

She's quite talented with accents, as evidenced in The Replacements, Dial M For Monkey and Mike, Lu & Og (British), Tiny Toon Adventures (French), and Captain Planet and the Planeteers (Russian).

More recently, she's been heard as the villainous Nerissa in the second season of W.I.T.C.H., Maddie Fenton in Danny Phantom, Aerie in Baldur's Gate 2, Agent K in The Replacements, Ray Ray in The Life and Times of Juniper Lee, the female Smuggler in Star Wars: The Old Republic, and young Nick in Zootopia. She was the voice of Kanga in Disney's Winnie-the-Pooh productions from 2000 through 2010.