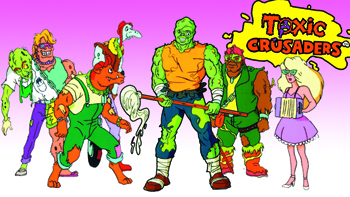 An Animated Adaptation of The Toxic Avenger film series by Troma, which originally ran from 1990 to 1991.

After a freak accident involving toxic waste turns one Melvin Junko into a hideously deformed creature of super-human size and strength, he becomes a superhero known as Toxie, who is able to sense and thwart evil wherever it turns up. He is soon joined by like-minded freaks as he defends his hometown Tromaville from the nefarious schemes of Dr. Killemoff.