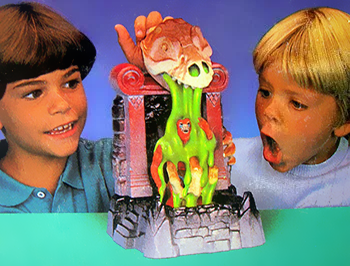 Various cartoons and toy lines, especially in the late 1980s and early 1990s, used repulsive slimy creatures and ooze to appeal to kids, especially boys (hence the trope name pun). Keywords were "gross", "slime" (or if you're British "gunge") and "ooze".

Toys often focused on some gimmick based around some goopy liquid, and most of these franchises had an obsession with the toxic waste theme. That meant lots of villains, and sometimes heroes, based on mutant abilities, bizarre chimeras, and distorted bodies. The ooze often appeared with a brightly unnatural Sickly Green Glow.

The theme gradually went away when more conventional comic book heroes started getting their own cartoon adaptations. Slime made a comeback in kids toys in The New '10s, though in addition to the traditional gross-out ooze aimed at boys, sparkly, rainbow, or "unicorn poop" themed slime toys aimed at girls also started to become popular.

See also Boys Like Creepy Critters, which uses the same idea of "gross" being cool to boys.