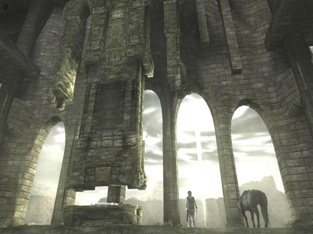 Beautiful. Ancient. Colossal. Inexplicable.
"Stay on this road here, past Dead Man's Curve, you'll come to an old fence, called The Devil's Fence. From there, go on foot till you come to a valley known as The Cathedral Of Lost Soap. Smack in the center is what they call Forgetful Milkman's Quadrangle. Stay right on The Path Of Staring Skulls and you come to a place called Death Clearing. Cabin's right there, can't miss it."
— The Farmer, The Lost Skeleton of Cadavra
Advertisement:

Every intrepid RPG player has done the Dungeon Crawl. Poking around ancient ruins looking for treasure or an important item while dodging the many monsters that make these places their home is the bread and butter of RPGs.

Close examination of those ruins, however, raises some interesting questions as to what these structures were originally built for. Ruins weren't always ruins, but many dungeons look like some contractor was tasked simply to build a vast labyrinth of dead-end corridors under a mountain and then cover the walls with creepy carvings. There is little to no evidence that people ever lived in these structures or used them for any practical purpose.

These enigmatic designs can be justified, especially if the ruins are only partially preserved, making their original purpose more difficult to ascertain. Often, however, the game designers are simply trying to create an interesting immersive environment for the player. It may be that little thought is given to the backstory of the structures you're looting. Practical concerns like living spaces, easy navigation, and easy access to the rest of the world are sacrificed for fifty-foot ceilings and walls that grimace and moan.

The explanation is thus Rule of Cool: the ruins are supposed to add to the atmosphere of the setting, either by being visually impressive or prodding the player into wondering about their purpose and creating the backstory themselves.

The level has a ruins aesthetic, though it is more cheerful than most examples.

The level has a ruins aesthetic, though it is more cheerful than most examples.