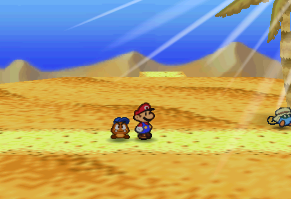 If you can't sand the heat, stay out of the desert.
"Ah, yes! Some more sand and some more cacti! How do you stand such a boring landscape?"
— Goombario, Paper Mario 64
Advertisement:

The video game desert is a vast, hot and dry place, usually with Egyptian-style pyramids. It can be a big part of games set in a Scavenger World, or usually the second world on the itinerary after Green Hill Zone. Thankfully, heat stroke and dehydration are usually not a problem — unless they are, in which case they may be worked in as environmental effects that deal you constant damage unless you use special gear or power-ups.

Some desert worlds have stages that take place in or on the Pyramids; others may include oil rigs and refineries as part of the stage or in the background, in reference to Saudi Arabia being largely desertic and at the same time incredibly rich in crude oil. Cities and towns in this world are often Arabian in appearance, even if the people do not quite fit the distinction. The music will also usually be Middle East inspired.

Enemies in this world usually include vultures, snakes, scorpions, djinni, living sand, huge sandworms, giant antlions at the bottom of sand traps and other Big Creepy-Crawlies (Or anything out of One Thousand and One Nights). Also vaguely Arabian-style bandits — turbaned and scimitared versions of whatever Mooks the Big Bad hires. Expect homicidal animated cacti, even if the desert is clearly not American. You can be sure that any attractive under-dressed women that you meet are planning to poison you, stab you, and set you on fire.

Provided you manage to enter the desert without having to accomplish some kind of quest beforehand, you'll likely have to deal with quicksand and/or a sandstorm. Also common are rivers and whirlpools of sand flowing into Bottomless Pits (when there isn't an Antlion Monster at the bottom). Spiky cactuses will also be common, and hurt you if you run into them. Camels may be found around here, usually to ride. Watch out, they spit! Flying carpets and dust devils are another common mode of travel. Be assured that you will be going to a Temple of Doom at some point.

Named for the desert world in Super Mario 64. It doesn't have to be a Drought Level of Doom, but it's a reasonable place to have one.

The nongame variants are the Thirsty Desert, in cases where survival is the main concern, and the Sea of Sand, when orientation and monotony are the chief issues.