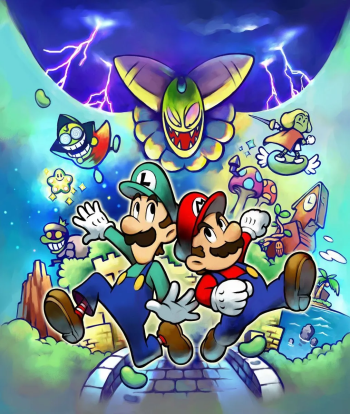 An adventure so big, you'll need both bros.!
Mario & Luigi: Superstar Saga is the first game in the Mario & Luigi spinoff series of the beloved Mario franchise, released in 2003 for the Game Boy Advance, and for the Wii U eShop in April 2014.
Advertisement:

In one of the most elaborate original games made for the Game Boy Advance, Mario is sent to the Beanbean Kingdom, which conveniently adjoins the Mushroom Kingdom. Luigi reluctantly goes along after Mario and Bowser join forces. The Big Bad Cackletta reportedly has stolen Princess Peach's voice (yes, her voice) in order to activate the Beanstar, an artifact with the power to grant wishes.

Superstar Saga has a remake for the Nintendo 3DS, called Mario & Luigi: Superstar Saga + Bowser's Minions, that was released October 2017, updated to the same graphical style of Dream Team and Paper Jam. As indicated by the addition to the game's title, included in this remake is a new mode called Minion Quest: The Search for Bowser, which features Bowser's minions banding together in order to rescue their master.