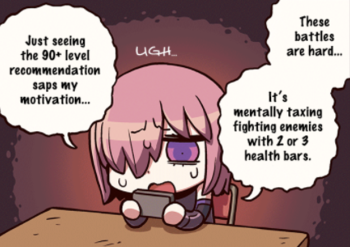 "Therefore, it's the game's fault that I suck at it!"
— Third Rate Gamer, on Rocket Knight Adventures
Advertisement:

Difficulty is a tricky thing to get right in games. It is essential for a game to remain fun for most people, it challenges the player and keeps them engaged. Completing a tough task or boss can supply a lot of satisfaction, especially after failing to it.

Too much difficulty though can drive some players away. During the transition to 8-bit to 16-bit, the difficulty of games began to be more scrutinized. Once games went 3D, both gamers and companies found that the high difficulty of several games made them inaccessible and a flawed left over from the days of arcade games that tried to be as unfair as possible to get more quarters. Since then, games in general went from Nintendo Hard to more accessible to today's gamers. Still, every once in a while, a game comes along that provides a challenge reminiscent of the Trope Namers of Nintendo Hard. To some gamers, this is ridiculous. Video games are about fun, and frustration isn't fun! They're like black and white! Right?

Not quite. There's nothing inherently wrong with a "hard" game. While a large number of gamers find easier games to be more enjoyable than ones that may make them Rage Quit, some gamers like having a challenge in their games. People play games for different reasons; some play to chill out and escape the trials and tribulations of daily life, while others seek such trials within video games. Some games are legitimately hard and can provide a great and potentially fun challenge.

Even to those who seek games that are monstrously hard though, there is a point where things can get too challenging and a game asks too much of the player. This is where this trope comes in, when a games difficulty is so high it actively makes it less fun to play for most gamers.

Difficulty can be a legitimate complaint, depending on what kind of difficulty. Sometimes the difficulty is too inconsistent and throws too much at the player at once and there's a huge difficulty spike. Other times a game is unforgiving in its design, like severely hurting or outright killing your character after just one or two hits without supplying many resources to recover. Then there are times the game has harsh penalties for when the player fails too much. In older games especially such punishments can be incredibly rough, in particular being forced back to the beginning a level, a set of levels, or even being forced to restart the entire game.

Other games are difficult for the wrong reasons, which can be quite legit. And commonly, when discussing the latter, it's best to keep discussion to that page. But it can still lead to justifiable entries on this series where people criticise the game as being too hard due to Fake Difficulty.

This type of complaint can happen if the preceding game in the series was significantly easier.

The polar opposite of It's Easy, So It Sucks!, where a game lacks enough difficulty to be fun for most gamers. When people try to force the way they play the game (which generally has to do with difficulty) onto other people, you have a Scrub a or "Stop Having Fun" Guy. When you have both It's Easy, So It Sucks! and It's Hard, so It Sucks, you either have a deeply flawed game or an Unpleasable Fanbase.