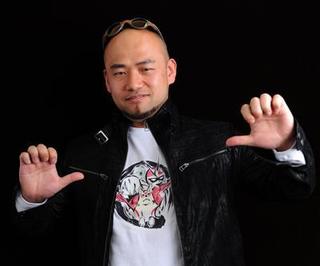 Hideki Kamiya (born December 19, 1970) is a Japanese game designer best known for his incredibly blunt, sometimes irritable nature and his critically acclaimed action games, which tend to cram together ludicrous amounts of stylistic insanity and razor sharp action gameplay. Born in Matsumoto, Nagano, Kamiya began his career in 1994 as a designer for Capcom.

He made his directorial debut in 1996 with Resident Evil 2; during development, he met veteran producer Shinji Mikami. Eventually, Kamiya would go on to create and direct the original Devil May Cry, which was released in 2001 to critical acclaim. After Kamiya worked on Viewtiful Joe in 2003, the members of his development team would later go on to form Clover Studio in 2004 with fellow producer Atsushi Inaba serving as CEO. His final directorial project for Capcom would be Ōkami, which was released in 2006 and became an Acclaimed Flop upon its release. That August, Kamiya left Capcom along with Mikami and Inaba. From there, the trio would later go on to found Seeds Inc. One year later, the studio merged with Odd Inc., which was founded by former Capcom developer Tatsuya Minami, to form PlatinumGames. Kamiya's next project, Bayonetta, was released in 2009.

, which is to say, that's where he trolls his fans mercilessly (and berates and blocks people for asking stupid or repetitive questions). note In July 2018, he temporarily banned anyone from responding to him in any non-Japanese language, including English. In fact, an entire documentary was made about this

where he personally, happily and proudly admitted that at the time he had blocked over 17,000 people without the use of a blocklist. Even Platinum themselves were not safe from his blocking.

For a time, he used the account to practice his English skills, but eventually lost patience with his audience and now instantly blocks any reply that isn't in Japanese.

Hideki Kamiya and his works provide examples of: