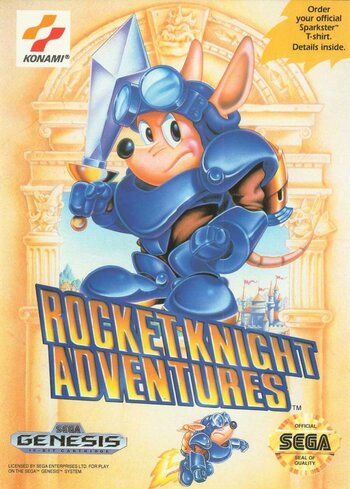 "Just look at him: he's a knight with a jetpack! YOU CAN'T TOP THAT!!!"
— The Happy Video Game Nerd
Advertisement:

Zephyrus, a Magical Land full of Funny Animals in the world of Elhorn, has a problem. Long ago, during the reign of El Zephyrus, the first monarch, an invading power used a giant warship called the Pig Star to wreak havoc. They were defeated at great cost, and the dreaded Pig Star was placed under a magical seal to keep future enemies of Zephyrus from using it. Since then, the descendants of El Zephyrus have kept the Keys to the Seal safe, and an elite order of fighters, the Rocket Knights, was founded to protect the royal family from harm.

Sparkster, the current leader of the Rocket Knights, came to power after a traitorous Knight, Axel Gear, killed his superior and former captain Mifune Sanjuro. He banished Axel Gear, but this proved to be a bad move. Our story begins when Sparkster, hearing of a new invasion, speeds to the capital to find that Axel Gear has returned as the stooge of the aggressive Devotindos Empire and kidnapped the Princess while the Empire's troops burn the castle, hoping to get the Key to the Seal as ransom. What Axel Gear doesn't know is that only the Princess herself knows where the Key is...

Rocket Knight Adventures is a side-scrolling action platform game series by Konami with diverse and distinctive gameplay mechanics such as short-range jetting in eight directions (including ricocheting off walls and around corners), charged attacks, swordplay, the occasional bit of shmup-style sustained flight, and much much more. The original game, on the Sega Mega Drive/Genesis, spawned two more games: Sparkster: Rocket Knight Adventures 2, a sequel also on the Mega Drive, and Sparkster, a game on the SNES which takes place in an alternate continuity. The series may owe its existence to the Sonic series, which put Funny Animal mascots in vogue and likely influenced the series's art style.

Sparkster returned in 2010 in a new 2.5-D adventure developed by Climax Group, simply titled Rocket Knight. According to the story, there haven't been any new games in the past 15 years because nothing's happened in 15 years. And when an army of Wolves attacks, Axel and the Devotindos are fighting alongside the possums. Apparently when Sparkster defeats you, you stay down.