Video Game / Spider-Man and the X-Men in Arcade's Revenge 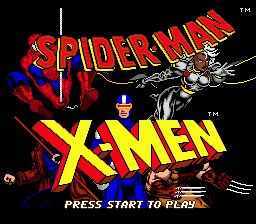 The Title Screen
Spider-Man and the X-Men in Arcade's Revenge is the title of a video game first released for the Super NES in 1992 by Software Creations, and published by Acclaim's LJN label. The game was later released for the Genesis, Game Boy, and Game Gear (versions for Sega consoles were released under the Flying Edge label). The single-player game features Spider-Man and the X-Men, teaming up in one of the first Marvel Crossover games to take on classic villain Arcade.
Advertisement:

The playable characters are Spider-Man, Cyclops, Wolverine, Gambit and Storm.

GET READY TROPER. The game provides examples of the following tropes: