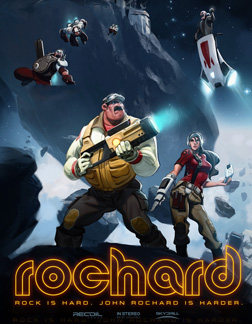 "Rock is hard. John Rochard is harder." - Tag Line
"Turbinium. Space Diesel, we called it. It had been four years and thirteen asteroid fields since we'd found any. Our team had been on a long streak of bad luck. And the latest asteroid we were drillin' was the worst. That day we'd blown a turbo from a drill rig, and I was returning to the rock with a new one. That was the day of the big find. The day our luck changed. I shoulda known then there's no such thing as coincidence. It's all connected. Yeah, talk about a bad day gone worse..." John Rochard, giving the Opening Narration.
Advertisement:

Rochard is a Sci-Fi side-scrolling Platform Game developed by Recoil Games and published by Sony Online Entertainment. It came out on September 27, 2011, for PlayStation 3 in the United States, and in Europe the following day. The game was released for Steam worldwide on November 15.

The Opening Narration above covers most of what you need to know. It's 20 Minutes into the Future. You are John Rochard, hard-working Asteroid Miner. You're down on your luck, your equipment is falling apart and no sooner does your crew turn up a mysterious find than Space Pirates show up to ruin your day. Time to show them the door.

You begin the game with a G-Lifter: a handy tool that can grab certain objects (mostly crates) and toss them about. Gameplay involves negotiating various rooms occupied by physics-based puzzles and enemies. You can move objects with the G-Lifter and engage low-gravity at will in order to solve these puzzles. To fight enemies, you can jump on their heads, hit them with the G-Lifter, or toss objects at them. Or just shoot them, once you have the Rock Blaster upgrade. Or blow them up, when you get Explosium charges.

The game happens to have a bit of star power behind it: Jon St. John provides the voice of Rochard, and Markus "Captain" Kaarlonen of Poets of the Fall composed the soundtrack, with the full band on board for the theme song, "Grinder's Blues

". The soundtrack can be bought with the game for a modest price.