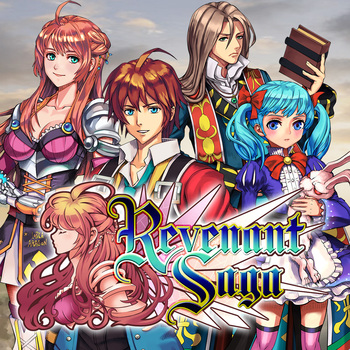 Revenant Saga is an Eastern RPG Mobile Phone Game released in 2014 created by Kemco as part of its line of mobile titles and developed by the EXE-Create team. Along with its mobile platforms, it is also available on Steam, Wii U, Nintendo Switch and Play Station Network.

The world is facing an unprecedented crisis as a deadly plague sweeps the land and mysterious monsters known as Revenants begin to appear. These Revenants cannot be killed by normal means and require being dispatched by someone with special power from the Order of Rystoria. But the number of Revenants only continue to increase as the Order cannot maintain its numbers against an ever-growing enemy force threatening to wipe out all of humanity.

As this goes on, a young man named Albert mourns the loss of his parents from the plague and receives comfort and support from his Childhood Friend Anna. Sadly, Anna's parents also contract the plague and, in an effort to return the favor, Albert volunteers for a medical experiment to help a wandering doctor named Dr. Moreau who is trying to cure the plague. Unfortunately for Albert, it is all a trap and the doctor has been using human experiments to create Revenants with Albert and Anna as the latest subjects. The experiment on Albert is interrupted midway due to the arrival of the Order, but he is presumed dead and buried, only to re-emerge shortly thereafter both still alive as a Revnant with his human form and the soul of a demon named Magnus inhabiting his body. Swearing revenge on Dr. Moreau, he spends the next two years as a Revenant hunter to seek him out and learn what truly happened to Anna.