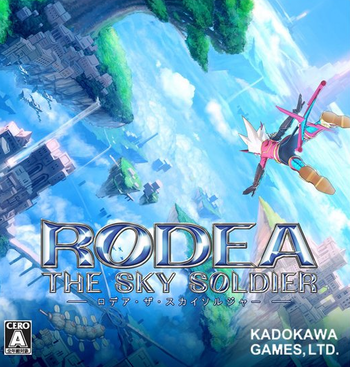 Rodea: The Sky Soldier (Tenkuu no Kishi Rodeanote Rodea: The Sky Knight in its original Wii incarnation) is a "Flying Adventure game" for Wii U and Nintendo 3DS by Kadokawa Games and Prope, designed by Yuji Naka of Sonic the Hedgehog and NiGHTS into Dreams… fame, released on April 2nd, 2015 in Japan, November 10th, 2015 in the US, and November 13th, 2015 in Europe. The game's main gimmick is the protagonist's ability to fly, which is used to solve puzzles and defeat enemies.
Advertisement:

Once upon a time there existed two countries: Naga, the terrestrial machine empire, and Garuda, a floating kingdom in the sky. Thanks to their advanced technology, the Naga Empire thrives. Seeking the power contained in crystallized Graviton energy, Naga gazes skyward at the neighboring kingdom of Garuda and launches a full-scale invasion.

Princess Cecilia, the daughter of Emperor Geardo, ruler of Naga, attempts to flee to Garuda alongside her robot bodyguard, Rodea. Trapped by her pursuers, she entrusts Rodea with half of the Key of Time, an artifact that is integral to the success of Naga's invasion. Using the remaining half of the Key's power, she teleports Rodea to Garuda, depriving Naga of the intact Key of Time, thereby preventing the earthbound aggressor from successfully carrying out its invasion.

Since then, 1,000 years have passed and Garuda's citizens regard Naga's failed invasion, as well as the Naga Empire itself, as little more than a footnote in the pages of history. At a small village in Garuda, a young woman named Ion lives a peaceful life with her grandfather, where she spends her days tinkering with machines and inventing all sorts of odd gadgets. One day, Ion is surveying an ancient ruin when she discovers a deactivated, broken robot — Rodea. Though Ion repairs the damage to Rodea's body, the damage to Rodea's memories is too extensive. He remembers next to nothing about his past, save for his mission to save Garuda, and the face of a young woman who bears a striking resemblance to Ion.

The game was initially thought to be Vapor Ware until an announcement in November 2014 revealed the game was slated to be released in Spring 2015. NIS America announced that they will localizing the game for English release in North America and Europe during Fall 2015. First print editions of the game will have the original Wii version packaged in America, Japan and Europe.

The official English trailer can be found here

. The old version of the trailer can be found here