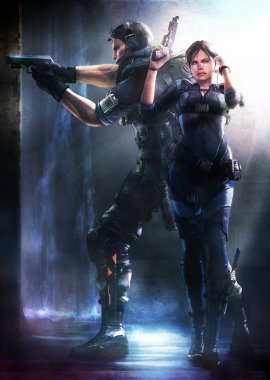 "We are Veltro, vengeful messengers from the depths of the Inferno!"
— The Veltro agent

Resident Evil: Revelations is the second Resident Evil game for the Nintendo 3DS (following The Mercenaries 3D), released in 2012. Set between the events of Resident Evil 4 and Resident Evil 5, Revelations returns to the roots of the series with a larger emphasis on the classic elements of Survival Horror and tense exploration, whilst still retaining the Third-Person Shooter style of RE4 and RE5. Despite being developed for a portable system, Revelations was produced with the same production values and resources usually devoted to a console game in the series and is considered the eighth installment in the main series alongside the numbered titles.

In 2005, BSAA agents Chris Redfield and Jessica Sherawat have gone missing while investigating a suspicious cruise ship (the SS Queen Zenobia). Jill Valentine and Jessica's partner, Parker Luciani, go on board a ship to find them. Unfortunately, things spiral out of control, as almost everyone on the ship is dead and BOWs are running amuck, thanks to a new virus called T-Abyss.

The Revelations incarnations of Chris and Jill appear in the 3DS crossover collaboration Project X Zone.

It has a sequel, Resident Evil: Revelations 2, which received an episodic release in February and March 2015.