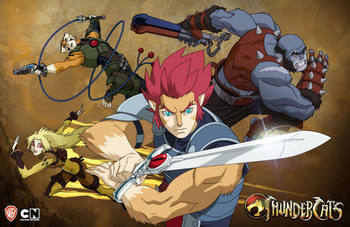 "I'm pretty sure I'll be the main character. The people with swords usually are."
— Lance Swordfighter, Gold Coin Comics
Advertisement:

Want to know who is The Hero and The Leader of a group? Look for the guy with the sword!

The sword is a sign of the mighty warriors and nobles. It's a central part of codes of honor like chivalry and bushido, symbolizing nobility, leadership, justice, and power. In a group of fighters, the one wielding the sword will be the leader, with his subordinates wielding axes, spears, bows — all weapons more associated with the commoners.

In European settings, it will usually be an arming sword or an Archaic Weapon for an Advanced Age. Larger two-handed swords, smaller daggers and short-swords, and curved swords like scimitars will be given to other characters (scimitars especially have an evil reputation, although some heroes do still carry them). In Japan, it will be a Katana. An especially heroic sword will likely be a named weapon.

May or may not be fully justified in-universe with tropes like Firearms Are Cowardly and Guns Are Worthless and outside; see The Analysis page for more on historical justifications in Real Life. (Short version: Historically, until the late 13th century if you were worth training or could afford it, the sword was your primary weapon. 14th century and later the evolution in armor started to make other weapons more effective and at that point, the sword began its transition into a secondary weapon. This was also the period of time most corresponding to the popular image of a 'knight in shining armor'. This lasted until repeating pistols showed up, but until then they were an effective, easily carried sidearm if your polearm was lost or broken.)

Sometimes The Lancer will be armed with a different weapon to differentiate him from The Hero, or just a more unusual type of sword (i.e.: if the Hero uses a broadsword, the Lancer may wield a rapier or katana). The Big Bad and The Dragon are nearly as likely to use swords as The Hero, but will also sometimes use more "evil-looking" weapons such as morning stars, battle-axes, or maces, especially with spikes.