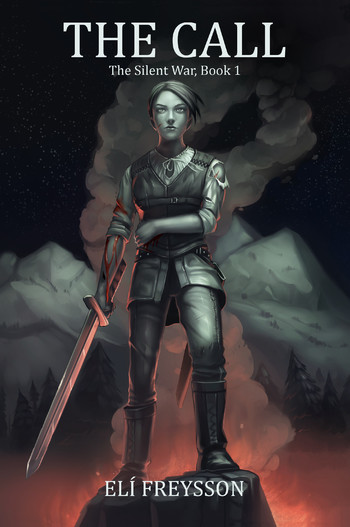 A Low Fantasy series created by Icelandic author Eli Freysson, currently consisting of five books, two of which have been translated into English.

It has been a millennium since the Shattering all but destroyed the world, forcing mankind to start anew and found a single nation from the ashes. For centuries it kept the peace, civilized ever more territory and waged war on the supernatural forces let loose by the cataclysm.

And then it collapsed, splintering mankind into feuding states.

In the three centuries since the war has been fought in the shadows, by various agents and orders with differing goals. Mankind forgets and wages war on itself, as its true enemies slumber and wait for the right moment to rise . . .

The series opens with teenage girl Katja. Rowdy and directionless, she has always been haunted by odd visions and an inexplicable certainty that she faces a lifetime of violence.

Then, shortly after she slays a demon that attacked her village, Katja is approached by a mysterious woman named Serdra. The stranger offers the answers Katja has always longed for. They are the same, she says; two of the very few born with special gifts for beating back the supernatural.

Both frightened of the future promised by Serdra and excited at being offered a purpose, Katja follows her new mentor out into the wider world, and so enters the Silent War.

The Silent War contains examples of: