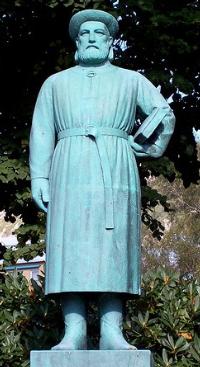 Snorri Sturluson (1179—September 23, 1241) was a medieval Icelandic chieftain, landholder and political official, and a poet, historian and mythographer. His name may also be encountered spelt Snorre Sturlason (Norwegian) or Snorre Sturlasson (Swedish), but Snorri Sturluson is the recommended form in English, as it’s correct Icelandic and Old Norse. Note that Sturluson is a patronymic, not a family name; he is referred to as Snorri for short, not "Mr. Sturluson".

Snorri is the single most famous author of medieval Iceland and Old Norse literature in general. His works are the first climax of the Golden Age of Icelandic literature, during which the island produced the Eddas and the Icelandic Sagas. This arose from the synergy of the introduction of foreign literature and learning, and a newfound interest of the Icelanders in their own history and the traditions of their pagan ancestors.

Snorri's most famous work is the Prose Edda, also known as Snorra Edda after its author. The Prose Edda is easily the single most important source for Norse Mythology; not only because it records a lot of myths, but because it attempts to actually explain them and to describe them systematically. Without Snorra Edda, much of the Poetic Edda and many other sources on the matter would remain incomprehensible.

His other major work is traditionally considered Heimskringla, a massive chronicle of Norwegian history; or, more accurately, a work moving from pseudohistory through historical fiction to history in its recounting of the lives of the kings of Norway from the time of the Aesir up to 1177 AD. There is, however, no absolute certainty on how much of Heimskringla is Snorri's personal creation, as it is an anonymous work and may be a collaboration of various writers.

There is a hypothesis, grounded on an analysis of the vocabulary, that Snorri is also the author of Egil's Saga, one of the big Sagas of Icelanders. Tentatively, Snorri might have taken an interest in Egil, as Egil was Snorri's own ancestor, and was considered Iceland's best poet from pagan times. Definite proof for that conjecture, however, is lacking. Contentwise, many scholars has pointed out that Egil's Saga has a radically different attitude to Norwegian king Harald Fairhair and his family and does not agree about the names of his sons and grandsons which is out of character for the meticulous Snorri.

Besides his fame as a poet and writer, Snorri also had a rather illustrious political career, which came naturally with his being born into the Sturlung clan, one of the most powerful Icelandic families of the era. He was raised at Oddi in Southern Iceland, at the time Iceland’s center of education, which laid the foundations for his later literary accomplishments.

As a personality, Snorri has been described as “avaricious, ambitious and aspiring”; while these characteristics were hardly unique among people of his class at the time, he was more successful than most in accumulating wealth and power. His father died when Snorri was five years old, and when Snorri reached adulthood, he was relatively poor. Yet by inheritance, marriage, clever politics, and a thorough knowledge of the law, he was owner of several large estates by his late twenties, and was already regarded an oustanding poet and jurist.

In his mid-thirties he was elected lawspeaker of Iceland, an office (comparable to “President of Parliament” in modern terms) that he held for four terms (12 years) in total. He took a break from the office to travel to Norway (with a side trip to Sweden), both to make diplomatic connections and to satisfy his hunger for learning. The journey was the climax of Snorri’s fame; he enjoyed the patronage of the teenage King Håkon and his co-regent Jarl Skule, and was endowed with gifts and titles in return. Yet the king was not without ulterior motives, as he employed the plan to annex Iceland to Norway, and persuaded Snorri to swear an oath of allegiance that obliged him to represent Håkon's interests in Iceland.

Håkon's support benefited Snorri, making him, for a while, the possibly most powerful man in Iceland; but it also earned him the enmity of other chieftains who opposed a union with Norway. Most fatally, Snorri’s selfishsness caused disunity within the Sturlungs themselves, which erupted in a feud between Snorri and his own brother Sighvat and the latter’s son, Sturla. Snorri did not excel as a military leader, and got the short end of the stick. After his son Órækja and his cousin Thorleif had been captured and forcefully exiled to Norway by Sturla, Snorri tried to compromise by calling on the arbitration of King Håkon, and left for Norway too.

It did not help. Håkon was opportunistic enough to switch his support from Snorri to Sturla, and Snorri stayed with Jarl Skule instead, thus getting entangled in a brewing conflict between Håkon and Skule. In 1238, Sighvat and Sturla were killed in Iceland in battle with Gissur Thorvaldsson of the Haukdælir clan, and Snorri planned to return to Iceland. Yet Håkon, realizing that Snorri was no longer a loyal supporter, denied him permission to sail. With the help of Skule, Snorri left anyway.

Soon after, Skule raised a rebellion to overthrow Håkon. He failed and was executed. Håkon regarded Snorri as a traitor and allied with Gissur, giving the latter free rein to kill Snorri, should Snorri not surrender himself to Håkon. Snorri did not submit, and eventually was successfully attacked by the Haukdælir clan in his house at Reykholt, where, at the age of 63, he was killed with an axe-blow.