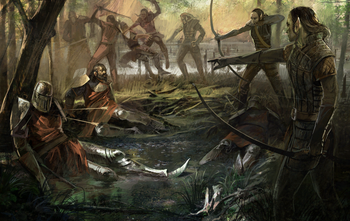 Your fairy tale kingdom can't save you now, dh'oine.

Low Fantasy is a catchall, and rather inexact, term for that sub-genre of fantasy that is set in a secondary world but is neither High Fantasy nor Heroic Fantasy, though it may overlap with other sub-genres. Not a good way to define a genre, but English is funny like that — especially our particular brand of it.

The designation is not a description of the quality of the work, but rather the amount of fantasy, and the number of fantastic or otherwise supernatural elements, that it contains, which can be rather difficult to measure. Sometimes comedies are also excluded from the genre, but either way the works that remain don't have a natural unity.

However, while there are no features all Low Fantasy has in common, there are features common in many low fantasies, each the opposite of one of the defining features of High Fantasy:

Distinguishing between low fantasy and soft science fiction can be tricky. Robert E. Howard, creator of Conan the Barbarian, wrote both; the Cthulhu Mythos is both. In a way, it's more accurate to consider each work's quality separately as belonging to either High Fantasy or Low Fantasy rather than try and categorise them as absolutes.

Not to be confused with Demythification, which removes the magical elements, but can keep the Black-and-White Morality and such.

Compare with Magic Realism and Dark Fantasy. Contrast with Standard Fantasy Setting, Dungeon Punk, and Urban Fantasy, plus the tropes mentioned above.