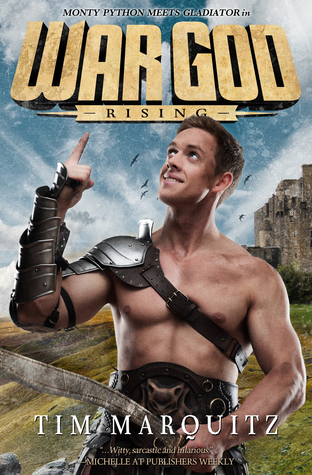 Hercules he is not.
Advertisement:

War God is a Black Comedy humorous fantasy novel by Tim Marquitz. It is Deconstructive Parody of both gladiator as well as sports movies. Set in a Fantasy Counterpart Culture version of Rome, it follows two con men as they attempt to make a fortune rigging the biggest gladiator tournament in the world with a country bumpkin.

Sand is destined for greatness. Or so a pair of two-bit criminals would have him believe. After rescuing him from certain doom, Bess and Kaede embark on a scheme to game the War God Tournament. It’d be easier if Sand wasn’t an alcohol-soaked twit with a disturbing interest in mutton. Pitted against monsters, magic swords, and murderers galore, they soon realize winning the tourney is the least of their worries.

The novel was independently published and released on January 31st, 2016.