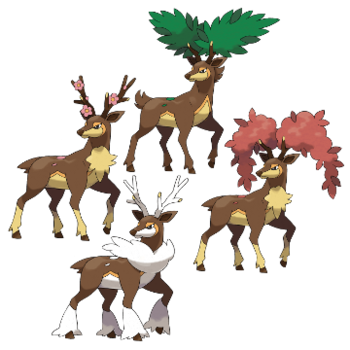 Vivaldi's favorite Pokémon.
"The shambler tree is the answer to the question: can a tree walk? The answer is: yes it can, but only if it becomes an animal."
— The War Against the Chtorr
Advertisement:

Sometimes, an organism will have both characteristics of a plant (for example, ability to photosynthesize, has leaves, flowers, and other plant parts) and characteristics of an animal (the ability to move around at will and it resembles a familiar creature). Scientists don't know how to classify it. We like to call it a Planimal. Fungus-animal hybrids also belong here: even though fungi are more closely related to animals than to plants, fiction treats them as the same thing often enough for them to count for this trope.

May cross over with Plant Mooks if they are treated as disposable cannon fodder. See also Man-Eating Plant and When Trees Attack for carnivorous plants and motile trees, respectively, that may or may not show animal traits and Plant Person, Sister Trope for sentient humanoid cases, and Plant Aliens, the science fiction counterpart.

Arlo encounters the Bog Lady, a treacherous swamp goddess who influenced Arlo his whole life and was furious when he left the swamp.

Arlo encounters the Bog Lady, a treacherous swamp goddess who influenced Arlo his whole life and was furious when he left the swamp.