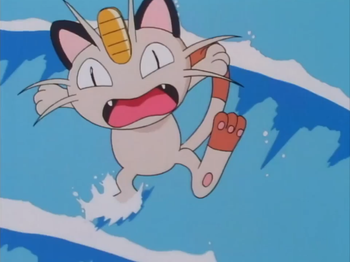 "I hate water! Especially wet water!"
To bathe a cat requires brute force, perseverance, courage of conviction - and a cat. The last ingredient is the hardest to come by.
— Stephen Baker
Advertisement:

Cats dislike water and avoid it whenever possible. It's their Weaksauce Weakness.

As far as Truth in Television goes, your kitties may vary; many actually do like water at least to some degree. In addition to certain breeds of domestic felines and quite a few moggies, many "big cats" (most notably tigers and jaguars, which tend to live in tropical rainforests with plenty of rivers and lakes) and "small cats" enjoy swimming. But we don't recommend giving your pet cat a bath without expert supervision, as for many cats this is largely Truth in Television... A general rule of thumb  Most cats don't inherently hate water; they just hate getting soaked against their own will.

Cats who overcame the fear of water (mostly when they're kittens) are considered literal Cowardly Lions at best. If by anything, don't be surprised to see a cat version of Toilet-Drinking Dog Gag.

While trying to catch a goldfish, a cat continuously races off to get a paper towel even when he gets remotely wet.

While trying to catch a goldfish, a cat continuously races off to get a paper towel even when he gets remotely wet.