Literature / The Cat in the Stacks Mysteries 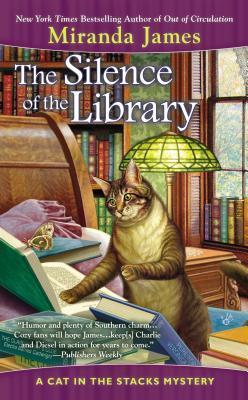 The Cat in the Stacks is an armchair/amateur sleuth/Cozy Mystery series by Dean James writing as Miranda James. The series features librarian Charlie Harris, a widowed father of two adult children, and his pet Maine coon cat Diesel. Having moved back to his old hometown of Athena, Mississippi three years before the start of the series and met Diesel one year later, Charlie works as an archivist in the library of Athena College and, with Diesel, has a tendency to stumble across mysteries.

The fourth book of the series introduced elderly sisters Miss An'gel and Miss Dickce Ducote, who also live in Athena and would later get their own Spinoff series, Southern Ladies Mysteries, in which the two follow in Charlie's footsteps in having to solve murders, both in Athena and in other locations they visit. The spinoff went on hiatus after its fourth installment, but the sisters, their pets Endora and Peanut, and their new ward Benjy Stephens (the latter three of whom were introduced in the first spinoff book) continue to appear in the main books afterward.

The two series (by publication order) consist of: