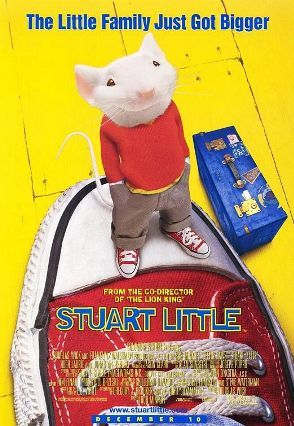 Stuart Little is a 1999 live-action/computer-animated film series, based on the 1945 children's novel by E. B. White. The films are produced by Franklin/Waterman Productions and released by Columbia Pictures. The first two films were directed by Rob Minkoff (of The Lion King fame) with the first film being notably co-written by M. Night Shyamalan. It even features one of his customary plot twists!

Live-action roles include Jonathan Lipnicki, Geena Davis and Hugh Laurie as the Little Family (George, mother Eleanor and father Frederick), while the voice-over roles include Michael J. Fox (Stuart) and Nathan Lane (Snowbell the cat). The film spawned two sequels in 2002 and 2005 respectively, and a short-lived animated series in 2003.

Tropes in the films include: