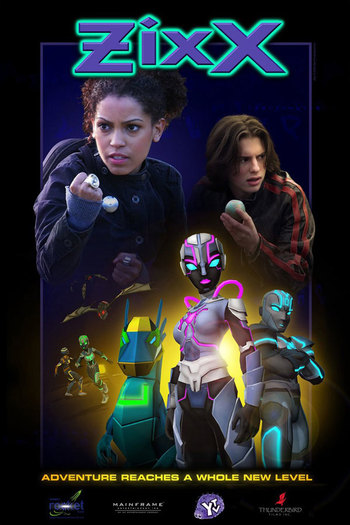 Zixx is a science-fiction TV show created by Jeffrey Hirschfield that ran from 2004 to 2009 on YTV (with a brief run on Cartoon Network) and ran for three seasons.
Advertisement:

An alien named Zixx Phunkee-Zee and her partner Flanngo crash land on Earth while investigating a lead on behalf of The Network. Once there they discover that the planet isn't as insignificant as it seems. For one thing, it's home to an ancient pocket dimension maze known as The Keep, which just so happens to operate a lot like an Earth video game. It's also where the evil Hargokk Empire is planning it's return. Led by Deeth, they seek to resurrect the evil alien warlord Oncolon from deep within The Keep and take over the universe.

Fortunately for Zixx and Flanngo, they receive help from local human children in investigating the secrets of The Keep and fighting off Deeth and his cronies. Best friends Adam and Griff help the duo in Level One, later being swapped out for Riley, Megan, and Dwayne in Level Two and Level Three.

Despite never gaining a huge audience, it's a source of nostalgia for many Canadian kids of that era and is notable for managing to wrap up it's main plot threads by the end of it's final season.