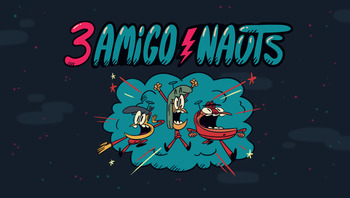 The 3 Amigonauts from left to right: Herby, Kirbie, and Burt
Where no goofball has gone before!
— Series tagline
Advertisement:

3 Amigonauts (sometimes called The 3 Amigonauts) is a Canadian animated show produced by 9 Story Media Group for YTV. It is the brainchild of Canadian animator Kyle Marshall, who Americans probably know best for his work as a storyboard artist and supervisor - and later head director - for Nickelodeon's hit cartoon The Loud House.

Set in a far-flung future where space travel, extraterrestrials, and highly advanced robots are commonplace, the show follows the titular ¡Three Amigos!, who are the energetic Herby, the gentle Kirbie (the sole girl of the trio), and the sluggish Burt. As students at the most prestigious space academy in the solar system, these three kids are the truest of pals as well as the biggest goofballs in the entire galaxy. When any task is handled by the 3 Amigonauts, they will be sure to turn it into a madcap intergalactic adventure whether they intended to or not!

The series began in August 2017 and ended in September that same year with a total of 26 episodes divided into 52 11-minute segments.