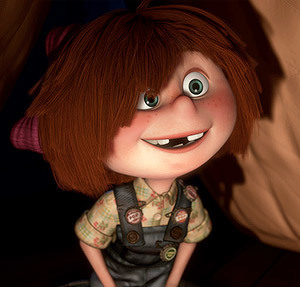 "He is a protagonist with the hair of a Japanese anime and the tooth gap of every kid from recent Western Animation."
— Honest Trailers about Hiro

A character's dental state will often be used to show their personality in fiction. A young child will often have missing teeth, typically the upper front ones, if they are supposed to be sweet and energetic or innocent. It may also be used with children who have had their baby teeth replaced to showcase someone who is troublesome or reckless, to the point where they knocked out or otherwise lost their adult teeth. A gap between teeth (not due to a lack of teeth) may be used to make a character look more innocent or youthful.

Compare to Youthful Freckles, another design trait used to showcase a character's youth.

Truth in Television: Most kids lose their baby teeth between six and ten years, and probably won't have orthodontic work done to repair more permanent gaps until the early teens. And of course, anybody can get a tooth knocked out if they're not careful.