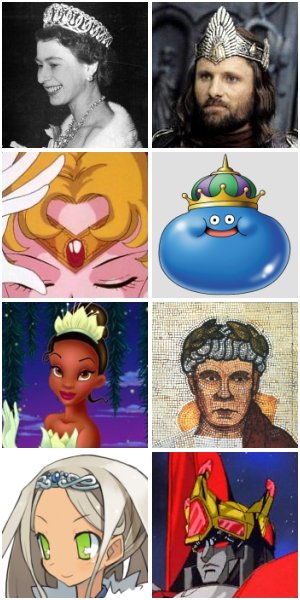 Some of the many types of crowns.note Left to right, top to bottom: Queen Elizabeth II, Aragorn, Usagi, King Slime, Tiana, Claudius, Sapphire, Starscream.
"This one last gift, dear child, for thee,
The symbol of thy royalty.
A crown to wear in grace and beauty,
As is thy right, and royal duty."
— Flora, Sleeping Beauty
Advertisement:

A sure-fire way to get across that you are important is to wear a fancy crown. It's the headgear of choice for Kings, Queens and Princesses alike, and no Awesome Moment of Crowning would be complete without it.

Cool Crowns come in many sizes and shapes but a few have distinct associations:

Sub-Trope of Nice Hat and a key piece of Requisite Royal Regalia. See also, Signature Headgear and Crown-Shaped Head. If it's cool enough to grant powers, it's a Crown of Power.