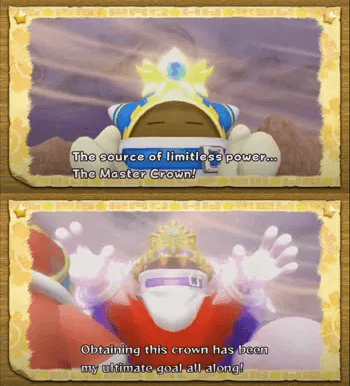 "I swear, it wasn't me, it was the crown."
— Simon Petrikov, Adventure Time
Advertisement:

Crowns are usually the first thing one sees on a ruler and have always been a sign of power. However, these crowns are different, the crown themselves give the power!

Most often used as a MacGuffin, Crowns of Power are headwear items that give power to the ones who wear them. More often than not, said power is a case of Cursed with Awesome, as there's a very likely chance that the crown either won't ever remove itself from the head of its wearer or will only work when the crown is on. Crowns of Power are more closely associated with villains than heroes; expect the Evil Overlord, Sorcerous Overlord, and The Emperor to have one of these.

Just because a powerful character wears a crown does NOT mean it's a Crown of Power. It only counts if the crown itself is the (or at the very least, a) source of power for the character.

Will most often be a Cool Crown of some type. Compare Hat of Power, which is this trope without the crown motif and design. See also Clothes Make the Superman.