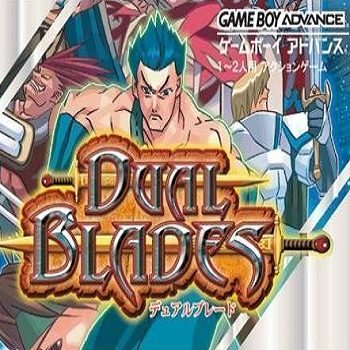 In 2002, Turkish-based developer Vivid Image released this weapon based Fighting Game for the Game Boy Advance. A summary from the other wiki states: "Dual Blades is a fighting video game published by Metro3D, Inc. for the Game Boy Advance. It is a fighting game with single player and player versus player modes. It features a "power combining system" which was very new for the genre at that time. This system allows players to create their own fighting style. Characters include ninjas, knights, and American adventurers, an Ottoman warrior named Efe and Nagasapa, an innocent-looking old lady who is in fact a Khazak sorceress."
Advertisement:

In 2013, a sequel titled "Slashers the Power Battle" was released as an Indie Game for Windows PCs, Android, and, in the following years, OUYA and iOS. It was made by Stun Games, the successor entity to Vivid Image, and was also published by KISS Ltd

. In addition to all the characters from the original game, a new character, Mirei Ozawa, was also included. A link to Stun Games website is provided here

, for mobile devices and Steam was released.

Not to be confused with the trope of Dual Wielding.