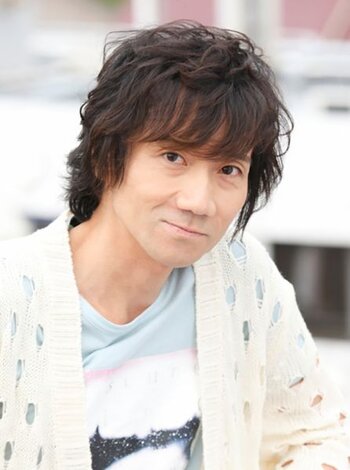 Slow down, ladies. He's in his fifties.
Advertisement:

WHAT THE!? This is like a dying message in a scene of massacre! This better disappear when I'm done describing!

Shin-ichiro Miki (born March 18, 1968), also can be spelt as "Shinichirou/Shin'ichirou Miki", is one of the members of the Weiss Kreuz group, alongside Takehito Koyasu, Hiro Yuki and Tomokazu Seki, the last of whom happens to be a good friend of his, with quite a few relationships in the history of their business. Miki's voice is mostly on the cool and laid-back side, however he can do Hot-Blooded types and even suavely sexy villains as well.

According to Anime News Network,

Has been somewhat pigeonholed as characters who attract the opposite sex, or maybe humorously pursue them but are almost always rejected. He has stated in interviews with Newtype Magazine that he hates having to exert himself with his characters. In an interview concerning The Vision of Escaflowne he was seen in pants with boobs on them, then went on to model them in a different segment of the interview.

... Huh? More messages?
-written in blood- P.S: Anyone who thinks this message is like a dying message cliche seen in this very site... has no sense of humor.
SHUT THE HELL UP!
A blood message? Not even my 86 would bleed like that!