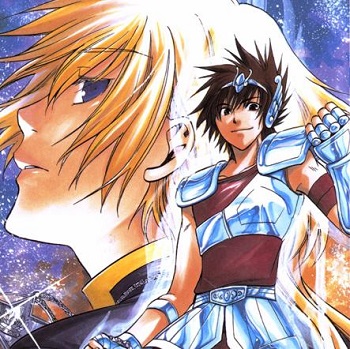 A prequel to the original Saint Seiya written and illustrated by Shiori Teshirogi, The Lost Canvas is set in the 18th century and tells the story of the previous Holy War between Hades and Athena.

Tenma, a young orphan growing up in Italy, and his friends Alone and Sasha, find themselves caught up in the war. Sasha is the earthly incarnation of Athena, while Alone is possessed by Hades. Tenma goes on to become the Pegasus Saint and try to save his friends from the ongoing war.

The series has been made into an OVA series, notable in that this is the only entry that Toei Animation has no involvement in, with production instead handled by TMS Entertainment. Crunchyroll.com

is now legally featuring the series (subbed) for free with the second season being simulcasted. In 2018, the series was made available to stream worldwide via Netflix. They also commissioned an English dub for it, making it the first Saint Seiya series since the original to be dubbed into English, and the only one since the DiC Entertainment dub to be recorded outside of Texas, with Bang Zoom! Entertainment on dubbing duties.

Sadly though, the series was canceled after the second season with TMS having no plans to continue it.