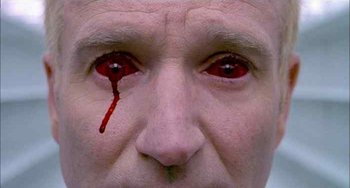 I told you to stop rubbing your eyes! Now look at them!
"I'm so happy I could cry, but I don't want to because it's really gross."
— Jessica, True Blood
Advertisement:

Or pus, or slime, or icky black stuff... If something's coming out of your eyes and it's not salty water then you can bet your buttons that something pretty bad is happening to you. The trope comes in two flavours, which are, oddly, created to have the exact opposite effect on the audience.

Flavour one is designed to freak them out, and is usually a sign that the person has been infected by some horrible virus, or is being killed by weird supernatural means. Eye trauma is one of the easiest ways to gross people out, and this method has the added advantage that the person can be "cured" without having lost their vision permanently. Alternatively, it signifies that the "weeping" person is in some way inhuman — or at the very least a candidate for supervillainy and somewhat demonic entities and characters. In this context, it's a close simile of the Deadly Nosebleed.

Flavour two, meanwhile, is used to signify someone's death in a poetic and possibly even "beautiful" way, especially if the character is a Tragic Villain. This is far less common, and the aim is not necessarily to freak out the audience but to add a layer of sadness to a death scene. Mopey vampires are particularly fond of this flavour. The undercurrent to this kind of bloody tears is that the person doing the crying is in some fundamental way (be it biologically or emotionally) incapable of doing so through normal means — but is so overcome with emotion that they are doing so anyway.

Alternatively, there's also a third flavour used to signify seeing something so disturbing or just plain awful that the person's eyes start bleeding from the sensation. This serves to showcase the object's sheer Squick or general painful suckiness, to the point of being a Brown Note of sorts. Quite commonly used on the Internet.

Along these lines, statuary or paintings doing this with the first flavour can mean someone present is utterly evil (if the items are holy relics) or that the item itself is an Artifact of Doom. With the second flavour, it means the item is a holy relic that's "manifesting" itself this way in response to some tragedy/holiness, whether of its own or those present.

Has nothing to do with the band in Wizards of Waverly Place.

See also: Blood from the Mouth, Psychic Nosebleed and Blood from Every Orifice, Rain of Blood.