Your Makeup Is Running 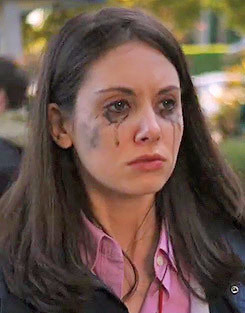 Nostalgia Critic: You weren't even wearing mascara. How is it running?
JesuOtaku: [confused] I don't know!
— The Nostalgia Critic, "Digimon: The Movie"
Advertisement:

When someone is wearing heavy makeup they run the risk of it getting smudged. This is especially true if they start crying or otherwise get their face wet. Their makeup will start to run down their face in heavy, inky and colorful rivers; mascara especially. The black lines streaming down the face are very striking visually and make a very visible sign of sadness. A Sub-Trope of Inelegant Blubbering.

Some characters may purposely invoke this effect by applying makeup in this way as a sign of continued grief, kind of like wearing black to a funeral. Be very careful, because these characters are generally carrying their sadness with an equal yearning for bitter revenge.

May sometimes overlap with Cosmetic Catastrophe, especially if it happens during production. May wind up being the result of Guyliner if it happens to a male character. See also Makeup Is Evil and Excessive Evil Eyeshadow.