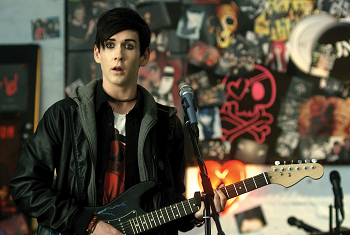 Originally short for Emotive Hardcore, a sub-genre of Hardcore Punk originating in the early '80s and developing into a Pop Punk/Alternative Rock movement generally referred to purely as "emo" in the '90s. Notable for distancing itself from the anti-authority, anarchic aggression of standard Punk Rock, "Emotive Hardcore" sought to express a more varied, emotionally-aware, contemplative and introspective range of ideas via the stripped down, DIY punk mentality. In the '90s and onwards, this philosophy turned itself to expressions of heart-on-sleeve feelings, often pertaining to unrequited love, heartbreak, and feelings of insecurity and alienation. The Turn of the Millennium saw the genre rise in popularity. It also saw the term take on a quite different meaning, with the emergence of 'Emo Pop' bands.

These genres' fanbases came to be known as "Emo Kids," or just "Emos." Due to the reflective and melancholic nature of the music, the idea of "being emo" came to suggest sensitivity, introspection, low self-esteem, a bent towards the artistic/literary, and a tendency to taking issues more seriously and personally than considered "normal". Due to media misrepresentation, pejorative stereotyping and general ignorance, emo has since undergone considerable Flanderization, and has become a victim of Cowboy BeBop at His Computer, particularly since the mid 2000's when the term gained traction in the mainstream media. As a result, "emo" is now a catch-all term for a rather ill-defined mish-mash of alternative music and subcultures, as well as entering the public lexicon as a noun or adjective suggesting excessive angst or emotionality.

Ultimately a person might mean any one of these when using the term "emo":

Due to the moody, melancholic nature of the music and the feelings it inspires, as well as the general vibe of the modern "emo image", self-harm, depression and suicide are associated with emo. Nowhere in actual emo subculture are these things encouraged; indeed for many the music is a form of therapy and is often why such people seek out the music. Some young people in the Attention Whore category may affect these for image purposes, but they should not be indulged by handing them the term they covet.

With regards to tropes, "emo" is generally associated with sensitivity, angst, moodiness and an excessive preoccupation with ones own feelings and woes. Emo contrasts with The Stoic in that The Stoic maintains their calm and composure where the emo types wear their angst writ over their very being. Can be Not So Stoic as they attempt to be The Stoic and fail. Perpetual Frowner, Troubled, but Cute, Dark and Troubled Past, Byronic Hero (which makes the trope Older Than Steam) could all be considered "emo" characterisations, a Woobie often gets a healthy dose of emo, and there's Wangst when one feels the angst is excessive - although some will term it that regardless. The Emo Teen page details the reductive stereotype commonly associated with the term.