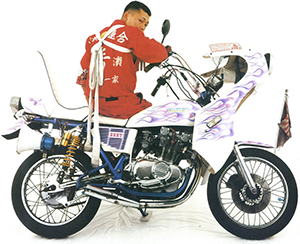 ", the 1973 Breakthrough Hit of Carol.note Footage taken from their 1975 farewell concert, featuring lots of shots of their bōsōzoku elite supporters / rock band Cools. And yes, the stage burned out at the end by accident.

Japanese Delinquents, but WITH BIKES!... Or at least that's what it may look at first glance.

The bōsōzoku (暴走族, lit. "running-out-of-control tribe") is a Japanese youth subculture associated with customized motorcycles. Their Distaff Counterpart is called ladies (レディース). On a wider scale, "bōsōzoku" is also the go-to term in Japan for any outlaw biker gang (i.e. Hells Angels count as bōsōzoku).

The bōsōzoku have distinctive features among the various subsets of Japanese Delinquents. The longest-standing media portrayal of Japanese delinquent is the yankii from the late '70s to early '90s, or the earlier '70s tsuppari, who typically belong to a very specific school setting; while the average bōsōzoku is more concerned with gang matters than with school issues, if they haven't already dropped out of it. However, due to their close average age, there was a noticeable trend exchange between the two subcultures.

The iconic bōsōzoku image is that of a low-speed zig-zagging motorcade gang making lots of loud noise and threatening whoever comes around, whose members engage in criminal activities with their peers. The average bōsōzoku was a delinquent teenager, and it was common to retire shortly before or after the age of majority at twenty — at least before Japan's increasing average age problem. Some low-ranked yakuza found an easy target of their activities with them, giving them drugs and weapons in exchange for money funds (and an easy way to recruit people, if they needed somebody to do dirty jobs) — the most faithful of them becoming eventually official pawns. By the time of their downfall in the late '80s, alternate ways of juvenile delinquency, such as the more American-influenced color gangs (カラーギャング) and the trendy teamers (チーマー), made the bōsōzoku look rather old-fashioned and outdated.

Their origin can be traced to The '60s' kaminari zoku (カミナリ族, lit. "thunder tribe"), close cousins of the Greasers and Rockers: youngsters who could afford motorcycles, subsequently removed their mufflers and rode them recklessly on roads. However, excluding their annoying noise, they weren't much of a concern to Japanese society... At least, before motorcycles became cheap enough for the average high schooler to buy in The '70s, thanks to Japan's fast economic growth — and among those teenagers, your average Delinquent, who was more concerned with causing ruckus than anything resembling proper racing.

The bōsōzoku started to get identified as such by police since 1972, when the cases of assault and blackmail by motorcyle-riding teenagers against civilians started to rise. In a short time, the number of gangs exponentially rose, and violent riotous fights between gangs equipped with knives, Molotov cocktails, wooden swords, square timbers or even nunchucks were increasingly frequent, to the point of becoming a national threat — it was at this time when the gangs started forming into coalitions to protect each other, and while the quantity of battles decreased, the number of participants in each skirmish was much higher (up to 600 in the biggest riots), thus the collateral damage higher. This proliferation of large-scale gangs had two direct consequences: the creation of strict anti-juvenile delinquency laws, and the foundation of hierarchical, almost militaristic structures within bōsōzoku gangs, both which would impact to the rapid downfall of the subculture in the late Eighties (ironically, in the latter case).

Naturally, the true bōsōzoku's defining trait is his close relation to a vehicle, save for notable exceptions. By far the most popular choice is a motorcycle, although cars are present to a lesser degree — ladies are commonly associated with unmodified scooters riddled with stickers. Vehicle customization is one of the main traits of the subculture, and since their modifications are mostly illegal, they're an easy target for fines and arrests. Inspirations for the motorcycle modifications include the Easy Rider-style American Choppers (which were incredibly expensive in Japan); the narrow, windshield-equipped bikes of the press riders (プレスライダー, TV/newspaper file couriers distinguishable through their employers' flag); and motorcycle championship racers. It's commonly thought that with every new generation of bōsōzoku riders, the inspirations started to muddle each other, making a unique hybrid of all of them with increasing flashiness. To recognize their bikes, expect to see at least one of the following features in a motorcycle:

For a long time, their choice of costume was almost indistinguishable from the British Ton-Up Boys/Rockers in the '60s, or the American Greasers in the '70s. However, it wasn't until the early '80s, during the peak of their craze, that the bōsōzoku's highly pseudo-nationalistic Iconic Outfit (inspired after some uyoku dantai uniforms) was made widespread between the gangs. This costume usually consisted of jumpsuits or tokkō-fuku (longcoats named after the tokkōtai kamikaze pilots, and originally an honourable item worn only by the leader, especially for important gatherings), and sometimes a scarf/gauze mask to conceal their identity and/or hachimaki headbands, both the traditional festival type and the WWII-style hinomaru style. Other stereotypical clothing accessories may include the tasuki sash or jika-tabi boots. Their clothing was usually embroidered with slogans written in needlessly complicated kanji, whether vaguely patriotic or simply cool-sounding English catchphrases, plus all sorts of far-right imagery like the Emperor's Chrysanthemum Seal, Rising Sun flags or swastikas. Ladies gangs are usually portrayed in similar clothing, but with a penchant for high heels and open tokkō-fuku jackets showing their sarashi.

It's commonly thought that their use of far-right paraphernalia was appropriated purely for shock value, although an alleged alternative reason is to justify that their gatherings were a form of political expression, in the case of being caught by police. Of course, the uyoku dantai, who were legitimate ultranationalist far-right groups, tried to take profit of this to recruit new members to their organizations, to mixed success. Since the '90s, the pseudo-nationalistic look has been usually heavily toned down to be less conspicuous, if not outright abandoned.

A particularly ironic offshoot is that of the toho bōsōzoku ("Walking bōsōzoku") from northernmost Japan, who can't take their motorcycles in frozen highways and keep making the same rowdy behavior, but on-foot. They've also been seen making noises in festivals and other places which don't let vehicles in. Some of them are simply amateur gangs who could buy bōsōzoku clothes but can't afford a vehicle yet. Another similar phenomenon is that of preadolescent kids who modify their bicycles with typical bōsōzoku modifications — even those have received small fines, probably to warn them of their idols' wrong behavior.

Rock & Roll was an important inspiration for Japan's rebellious youth in the '70s, and became a staple of bōsōzoku and yankii culture: once thought as old-fashioned during the '60s, Japanese bands like Carol, Cools or Yokohama Ginbae made rock, leather jackets, and pompadours popular again overnight. However, some rising rock superstars, like Carol's Eikichi Yazawa, took the decision to alienate a big part of their audience and ban any bōsōzoku from their audience to stop possible fights and other turmoil.

Japanese police technically classifies the bōsōzoku into two subsets: the kyōdō kiken (associative hazard), and the ihō kyōsō (illegal racing) types. The former subset is the well-known gang type; the latter is the more obscure offshoot of the kaminari zoku dedicated to street racing. These racers are more known as the hashiriya, and don't like to be associated with the standard kyōdō kiken-type bōsōzoku, because their profile is much more discreet than their cousins, since they're on the average more likely to be individualistic, and their vehicle modifications tend to be purely functional. Unlike the kyōdō kiken-type bōsōzoku, the number of hashiriya bikers has managed to stay afloat, peaking in the 10s — in fact, since their downfall in the '90s, the former kyōdō kiken-type bōsōzoku have borrowed traits from the hashiriya, such as being grouped on small individualistic and easily dispersible gangs, or having a bigger emphasis on racing.

The bōsōzoku didn't become a staple of Japanese popular culture until somewhere between the late '70s and early '80s, during their real-life peak. The media form where they were most popular was in manga, where the bōsōzoku genre was a brief but highly productive genre (along with its close cousin, the yankii genre), and probably gave them a reasonable boost of romanticization. In contrast, other media were less friendly: television mostly used them for cheap sensationalism (or the butt of the jokes in variety shows), their controversy made them taboo for contemporary anime other than inspiration for generic villains (at least until the OVA boom), the nascent Video Game medium was more concerned with fantastical and/or Hollywood-influenced settings, and films made by big studios were for a long time out-of-touch with contemporary trends, preferring to use western exploitation films like The Wild Angels for inspiration.

Nowadays, their longest-lasting legacy in Japanese media is being a shorthand of a Retired Badass, seen whenever a middle-aged character is revealed to be a former bōsōzoku / ladies. This is especially useful for female characters, who rarely have any chance of being associated in a movement wholly composed of tough girls.

Since The '90s, their membership has been rapidly declining, with most of the biggest gangs being already disbanded — a 2019 police report estimates 150 groups, in comparison to their 1981 peak of 835 groups. Some of the most noticeable reasons of their fall are a series of increasingly harsh police penalties, Japan's population ageing and declining birthrate, motorcycle enthusiasts being more interested in the hashiriya subculture, increasingly expensive vehicle and gasoline prices, the shift to eco-friendly vehicles, and an increasing disinterest of vehicle purchases in younger generations worldwide.

However, the bōsōzoku aesthetic is getting a revival through the kyūshakai, clubs composed of former bōsōzoku, young people who appreciate their style, and adults who didn't get to experience them in their heyday. Unlike their inspiration, though, they steer clear of any violent act or hierarchical organization, and drive vehicle parades on their free time such as weekends. However, they're still driving vehicles with illegal modifications, so they're closely monitored by the police (who usually receive complaints of their noise), in case one of them wants to emulate their inspiration further and drive recklessly on their own.