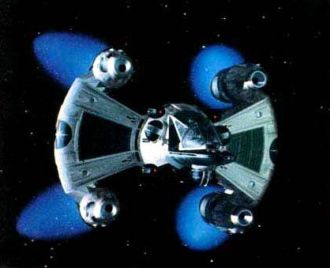 Careful — that's the last one.
More commonly called a Starfighter,

this is an absolutely ubiquitous trope in Science Fiction (and especially Space Opera): A small, one-man Cool Starship equipped with Slow Lasers and Macross Missiles, used by the Ace Pilot for Old School Dogfighting.
Advertisement:

A great many Science Fiction protagonists are Space Fighter pilots.

Some Space Fighters have room for two (or, rarely, more) crewmembers rather than a single pilot, but all are small and nimble, in contrast with larger Cool Starships such as The Mothership or The Battlestar. Typically Space Fighters are dependent on a larger vessel, since they themselves lack the space for supplies or (often) a Faster Than Light Drive; however, there are exceptions.

Battlestars will deploy Space Fighters against enemy Cool Starships with an appropriate Fighter-Launching Sequence. Fortunately for the Ace Pilot and his Wing Man, large enemy ships will usually turn out to be Point Defenseless—at least as far as the protagonists' Plot Armor-equipped Space Fighters are concerned. Thus the enemy will need to scramble Fighters of their own. An Old-School Dogfight will ensue. Expect many a Red Shirt Space Pilot to lose their life, thus underscoring just how risky The Hero's profession is, and making him or her seem all the more glamorous and heroic for it.

Quite often the Space Fighter will look just like a Cool Plane, because Space Is Air. At the very least, it's likely to have wings. This goes along with the use of the Old-School Dogfight, and is largely Rule of Cool: Whether a Space Fighter has wings or not doesn't necessarily have any bearing on whether it will ever be shown operating in an atmosphere. If it can fight in the air as well as in space, it's also a Space Plane.

Hard science fiction may instead employ more utilitarian-looking starfighters, with lots of engines and a completely un-aerodynamic shape. Some works may even opt for replacing Space Fighters with unmanned weapon systems controlled remotely or by AI—though in a setting involving Brain Uploading and The Singularity, the differences between a manned Space fighter and an Attack Drone could be very subtle.

As far as Real Life goes, actual designs for manned orbital spacecraft that could charitably be called space fighters do exist,

and the Soviet Union even launched a Space Station (the Almaz

program) armed with a cannon similar to those used on atmospheric fighters as a test of the concept (they destroyed some defunct satellites). The USA, meanwhile, developed a missile that, while launched from within the atmosphere, effectively turned any plane that carried it into a space fighter, the ASM-135 ASAT. While it never entered full production, a prototype was used to shoot down a satellite in 1984 after being launched from

◊ a McDonnell Douglas F-15A Eagle thereafter referred to as the Celestial Eagle.

See also Humongous Mecha (some may function as or even turn into Space Fighters). Space Fighters are a major part of the Standard Sci-Fi Fleet, and a common form of the Mook Mobile. If you're interested in discussing factors affecting the feasibility of Space Fighters in different settings, check out the Analysis page.