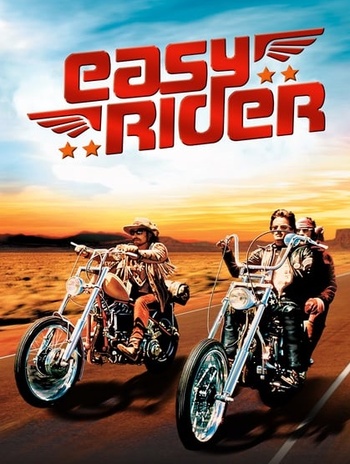 A man went looking for America and couldn't find it anywhere.
"Get your motor runnin'
Head out on the highway
Lookin' for adventure
And whatever comes our way"
— Steppenwolf, "Born to Be Wild"
Advertisement:

Easy Rider is a 1969 film directed and co-written by Dennis Hopper. It starred Hopper, co-writer and producer Peter Fonda and Jack Nicholson in his first Academy Award-nominated role. Since its release, it's been identified as THE Sixties counterculture film. It was also co-produced by the same guys responsible for The Monkees and Head.

It follows the tale of two dope-dealing bikers, Wyatt aka "Captain America" (Fonda) and Billy (Hopper), who decide to take their bikes across the country. They have no aim other than going to Mardi Gras in New Orleans, and pure freedom, which is not appreciated by the locals they encounter. Only one man, liberal lawyer George Hanson (Nicholson), shares their sense of freedom. As they ride along, they wonder what ever happened to America.