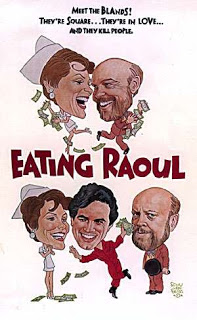 A 1982 Black Comedy directed by, co-written by and co-starring Paul Bartel. Inspired in part by the original British The Ladykillers and Kind Hearts and Coronets. Has also been compared to Charlie Chaplin's Monsieur Verdoux.

The plot involves Paul Bland (Bartel) and his wife Mary (Mary Woronov), a repressed and prudish married couple who live in Los Angeles and dream of opening a restaurant. However, they face a number of problems in doing so, not least being a lack of money and having to live in an apartment building that is frequently filled with seedy swinger types. After they are forced to kill a couple of swingers who attack Mary, the couple hit on the idea of murdering "rich perverts" and stealing from them to finance their restaurant. Things go smoothly until Raoul (Robert Beltran), a smooth cat-burglar, discovers what they're doing while breaking into their apartment. This forces the couple to join forces with Raoul to continue their scheme, which in turn leads to a love triangle developing between the three which quickly turns murderous...

Available on DVD and Blu-ray as part of The Criterion Collection. The Blands also make a cameo appearance in Chopping Mall.