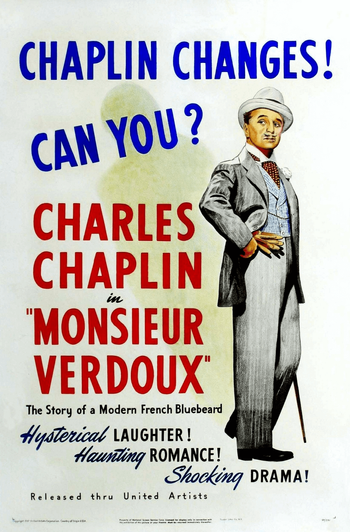 A 1947 Black Comedy film written by, directed by, and starring Charlie Chaplin.

Henri Verdoux (Chaplin) was a quiet, respected banker completely ruined by The Great Depression. Terrified of his wheelchair-bound wife and child being reduced to poverty and thrown out on the street, he takes to seducing wealthy, single (usually widowed) women across France and then killing them for their money. Through clever (if gruesome) means of disposing of the bodies and a charming personality, he manages to keep one step ahead of the police.

Three main plot strands play out over the course of the movie. At the beginning, Verdoux meets Marie Grosnay (Isobel Elsom), an elderly widow looking to buy the house he owns. He tries to win her over, but fails miserably. Later, in need of money, he travels to meet the easily excitable Annabella Bonheur (Martha Raye), planning on killing her and stealing her money. Unfortunately, she has just had her fortune read, which shows her to be an incredibly lucky woman. True to the reading, Verdoux's attempts to kill her backfire, nearly killing Verdoux on several occasions. In trying to develop better means to kill, Verdoux develops a poison which should be undetectable by autopsy. To test this theory, he plans to kill a girl off the street and leave her body where it will be found, then wait to see if anything comes up in the autopsy report. The girl he picks (Marilyn Nash), credited only as "The Girl", turns out to be charming, and tells the cynical Verdoux that she still believes in love, as she was truly in love once. Verdoux, heart melting, decides at the last possible moment to spare her life, and replaces her poisoned glass of wine with another.

The plots come together in the movie's climax. After narrowly escaping capture by a detective hot on his trail, and having a brief encounter with The Girl, where he gives her some money, Verdoux bumps into Madame Grosnay, sends her flowers daily until she relents to see him, and then is more successful at seducing her. The wedding is ruined as a common friend invites Annabella Bonheur; Verdoux spends most of the wedding hiding from her and eventually ends up running away before the marriage can happen. The movie at this point jumps into the future. In the prelude to World War II, European stock markets crash and Verdoux ends up losing everything. We learn in an aside that his wife and child died during this time (possibly with his "assistance"). Wandering the street, he bumps into The Girl, now dressed very chic in an expensive car. She treats Verdoux to dinner at an expensive restaurant, explaining that she's had to put her idealism aside to marry a man she doesn't love, but who can afford to take good care of her (being an arms dealer). A couple who had seen a photograph of Verdoux when a relative had left with (and later been killed by) him recognize him and immediately start to tail him. He traps them in a back room of the restaurant to give himself enough time to say goodbye to The Girl. After she departs he tears her card, returns to the restaurant, and hangs about until he is identified and placed under arrest.

Verdoux maintains his cynicism in the ensuing trial and later before his execution, declaring that he will see the Judge, jury and all present "soon - very soon" (i.e., in hell) and "One murder makes a villain; millions, a hero. Numbers sanctify, my good fellow" claiming the actions of war profiteers and soldiers kill far more, but unlike his are lauded. The movie ends as Verdoux - after having a last drink of rum; initially refusing, he then comments that he's never tried it and proceeds to do so - is lead off to the guillotine.