The Secret of Long Pork Pies 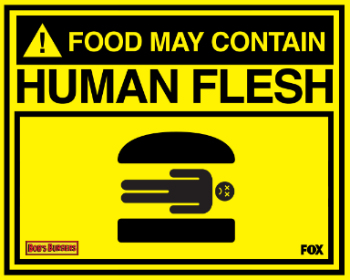 "[And] as for the other men, who worked in tank rooms full of steam, and in some of which there were open vats near the level of the floor, their peculiar trouble was that they fell into the vats; and when they were fished out, there was never enough of them left to be worth exhibiting, – sometimes they would be overlooked for days, till all but the bones of them had gone out to the world as Durham's Pure Leaf Lard!"
— Upton Sinclair, The Jungle
Advertisement:

A bizarre trope wherein the appeal of a meat product turns out to be caused by the addition of human flesh to the mix.

Some small business owners love it when their workers contribute a little extra something to make the food superb. No, not the "love and care" that the packaging promises, but fingers, toes... maybe even a whole leg. Oh, they might shudder at first, but sales numbers don't lie. Delicious, organic long pork, raised free-range on a nearby farm, can turn meat pies and sausages and whatnot from ordinary food to pure delights. Of course, since you can't always count on fortunate happenstance to add a little Stu to your stew, you'll probably have to start 'recruiting,' especially when you get into large-scale production...

This subtrope of I'm a Humanitarian and Human Resources seems to get off on that same impulse as the reveals of Powered by a Forsaken Child machinery or the connotations of Evil Tastes Good: deep down we suspect that all the wrong and taboo things are actually the tastiest—and perhaps They have banned the peons from indulging in them to keep them for Themselves.

A variation is the Urban Legend that street vendors use disgusting and/or stray animals to make meat products such as kebabs. It may be Truth in Television in some parts of the world. Indeed, the phrase "long pork" comes from an euphemism for human flesh in the South Pacific, some areas of which did have cannibalistic traditions. Serial Killers such as Fritz Haarmann, Karl Denke and Robert Pickton have also been accused of doing this with the meat of their victims. There are also rumors that human flesh tastes like pork (pigs are the only meat mammals which, like humans, have a genuinely omnivorous diet), except better for some reason.note Fridge Logic suggests that anyone who knowingly tries human flesh is likely either too insane to offer a trustworthy testament as to its quality, or so desperate from starvation that anything would taste good.

If someone unwittingly eats said pork pies and then discovers the secret afterward, it will inevitably lead to a cry of "I Ate WHAT?!" Sometimes functions as the commercialized version of Monstrous Cannibalism, showing how evil an employer is because employees' actual flesh is being marketed. An especially dark variant is Familial Cannibalism Surprise, when a hapless character is tricked into eating their own family member.

However, chefs who are given sufficient motives by the writers for this behavior are rather rare. If the chef themself is just a cannibal, then it must be asked why they're serving other people the meat they so prize. If the work is operating under the aforementioned rumor that long pork is somehow superior in taste to pig pork, then it must be asked why the chef went with such an illegal and morally repugnant method of improving their dish, rather than, say, looking up some new recipes. Occasionally, it has nothing to do with cannibalism or taste, but is simply a manner of Disposing of a Body.

Not to be confused with Fed to Pigs.

I've got a ''gut'' feeling Uter's around here somewhere.

I've got a ''gut'' feeling Uter's around here somewhere.