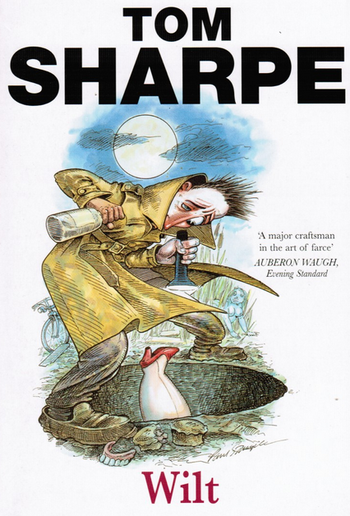 Wilt is a 1976 comedic novel by Tom Sharpe.
Advertisement:

Henry Wilt is a man approaching middle-age and facing a mid-life crisis. A graduate of Cambridge University, his later life was not one of stellar gilded brilliance propelling him to the top in the Civil Service, politics, academia, The BBC, or any of the careers usually red-carpeted or fast-tracked for Oxbridge graduates. No, Henry has sunk into suburban mediocrity as a Liberal Studies tutor at the Fenland College of Technology. He isn't even Head of Liberal Studies, as his dissatisfied wife Eva regularly complains to him. In fact, he is, to quote Wikipedia, "a demoralized and professionally under-rated assistant lecturer who teaches literature to uninterested construction apprentices at a community college in the east of England."

Eva is a dissatisfied woman who mixes socially with the wives of professional academics who did so much better than Henry and who have better clothes, better cars, better kitchens and better houses. She relates this dissatisfaction to Henry at every opportunity. And better children? Eva is the sort of larger-than-life woman who does everything to excess. As of the second novel, she's added to Henry's woes by becoming the mother of quads, all girls and all taking after their mother, who are being brought up in an atmosphere of laissez-faire parenting and regurgitated feminist slogans that even their mother only half-understands.

Despairing of his lot, Henry starts to fantasize about killing his wife and starting all over again ... and going on from here will require a lot of plot spoilers.