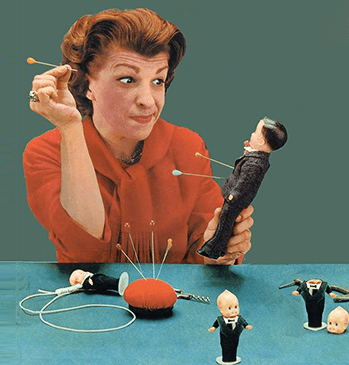 "Once women get the vote, the whole country will stop making such a pig's ear of everything! There'll be no more wars, no hunger, no stupidity! We'll elect a woman president, within the first ten years, of course, men are such judgemental prigs, you need us women to help straighten you out! Okay? With us helping, I'm not saying there won't be trouble, I just think we'll do a better job of things."
— Dorothea Wicklow, Suffragette of Saint Denis, Red Dead Redemption II
Advertisement:

This rather vague phrase can lead to tricky interpretation that's sometimes actively milked by writers, usually of romance fiction. Usually the assumption is that the character doesn't like machismo, or she has had bad experiences with men in her life, like her father, other relatives, or Love Interests. That is, dislike of traits associated with men or of a particular man or men in her life has manifested into a dislike of men as a whole. Other times, this phrase is simply used as a euphemism to imply that a character is a lesbian. Either of these will pose a problem for any male lead trying to woo her.

As with all dislike tropes, the degree to which a particular character Does Not Like Men can and does vary, from simple nervous avoidance to violent retaliation. However, this is a separate trope rather than a simple inversion of Straw Misogynist or He-Man Woman Hater, as there is almost always an explanation given for why the character feels this way, rather than it being depicted as an inherent character flaw in the way that men who dislike women are usually written. Often, the author portrays the misandrist in question sympathetically and hav it come from a bad experience, and vilifies whatever man or men drove her to hate the rest of the gender, whereas misogynists are typically one-dimensional antagonists who hate women for no real reason, making this trope more often than not tie into Females Are More Innocent.

If the reason they don't like men is that they were brought up in a society of institutionalized sexism, expect this character to be vilified in some way, or at the very least treated as unsympathetic, usually resulting in a Heel–Face Turn where they get An Aesop in "Sexism Is Wrong" (or something along those lines). If they are otherwise a good person who just has the "wrong views", you have a Politically Incorrect Hero, and if the character uses politics to justify their hatred, they are likely to be a Straw Feminist. If they don't take a hint and never learn about equality, expect this person to be a villain for the long term.

Other times it's just used to explain why a character isn't ever seen with a man. It's frequent that eventually one character comments on this and takes it as a sign of sexual orientation.